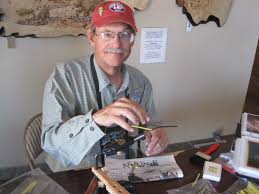 This Saturday we welcome back Richard Pilatzke.  Rich is well known for his striking damsel and dragonfly adult patterns, but this session we will get an opportunity to see the full range of his stillwater favorites.

If you haven’t attended before, our Saturday Tying Demo program features talented tyers from around the state, demonstrating their skills on the big screen monitor as we sit and drink coffee, take notes, eat donuts, and heckle our favorite tyers!  It’s free, and a fun time. 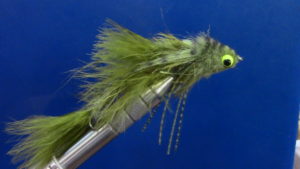 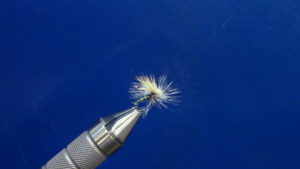 This Saturday we welcome Steve “Gonga” Rogers.  His tying demo will likely include everything under the sun, from teeny to titan, along with stories of big and/or numerous fish.

Steve can be found most Vise Squad nights tying something tandem and articulated like Craven’s Double Gonga, or Galloup’s Peanut Envy, so we are pretty sure he likes throwing big streamers.  But if you pay attention you will see he occasionally displays his talent in smaller trout flies, such as imitative baetis and Mercer’s Missing Link caddis ties.

This Saturday will be a great chance to see the full range of his tying, and interrogate him on streamer fishing.

Dave Mosnik is our featured tyer this Saturday.  Dave is a Red Feather area expert, and his patterns are proven and effective.  If you like fishing stillwaters, drop by for some expertise!

Dave oversees the membership fishing at properties for Red Feather Storage and Irrigation , a wonderful and handy fishery above Fort Collins.

f you haven’t attended before, our Saturday Tying Demo program features talented tyers from around the state, demonstrating their skills on the big screen monitor as we sit and drink coffee, take notes, eat donuts, and heckle our favorite tyers!  It’s free, and a fun time.

Judson is back!  We enjoyed his presentation last season, and had a blast when he hosted a Vise Squad session.  Join us this Saturday for more of his favorites, including soft hackles such as the Pheasant Tail pictured here.

Judson truly enjoys tying, and his enthusiasm is inspiring.  You will most certainly leave this session wanting to tie a few of his patterns for your box.

If you haven’t attended before, our Saturday Tying Demo program features talented tyers from around the state, demonstrating their skills on the big screen monitor as we sit and drink coffee, take notes, eat donuts, and heckle our favorite tyers!  It’s free, and a fun time. 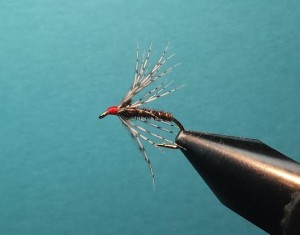 Download a copy of Judson’s recipes for this Saturday here:  Knowles Recipes 2015 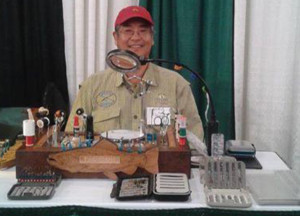 You won’t want to miss Phil Iwane this Saturday morning at 10 AM, where he will be demonstrating his favorite fly patterns including the “No Mercy Midge”.

Phil has a passion for fly tying and has been tying for over 20 years. He believes that there is nothing so rewarding then tying a fly, presenting your fly, watching the fish take it, fighting it, landing it and then releasing it.  Phil has tied hundreds of fly patterns and believes that you can never have enough cool patterns, however if you don’t have thousands of hours to invest in fly tying, then he recommends tying effective patterns that catch fish.  Phil will be tying patterns that he has had great success with at Big Thompson, 11 Mile Canyon, Cheesman Canyon, Deckers, Frying Pan, Dream Stream, Arkansas, Blue River, San Juan River as well as many other local streams.

Phil has tied at the Fly Fishing Show in Denver, The International Sportsman’s Exposition Show, West

Exposition, Fly Fishing Rendezvous, Fly Tying Expo, Art of Fly Tying at The Bass Pro Shop and at the local fly shops.  He also guides and supports our troops through Project Healing Waters. 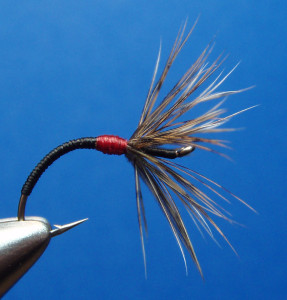 This Saturday we welcome Adam Omernick as our guest tyer.  Adam is immersed in flyfishing, as a certified casting instructor, a flyfishing guide (both Western and Tenkara), and through his business Zen Tenkara  (ZenFlyfishingGear.com).

We can expect a variety of styles and patterns, and a good time!

Join us for our fly tying demo at Elkhorn flyshop this Saturday at 10AM.  It’s free, including the coffee!

This Saturday father and son fly fishing and tying team, Shawn and Hunter Leloup, will be presenting their favorite patterns for fishing the Big Thompson Canyon and in RMNP.

Shawn, a native of upstate New York, has been fishing his whole life on both rivers and lakes.  Fly fishing in Colorado for 10 years, he has brought his 11 year old son Hunter into the wonderful hobby of fly fishing and tying.  Hunter started fly fishing and tying basic flies at the tender age of 7.  Now an accomplished fishing and tying aficionado, Hunter enjoys the late nights tying and long days on the river with his dad.

The duo will be tying some everyday flies with a twist and hopefully some new ones you haven’t used or seen before.

The 3 to 4 hour class will be conducted up the Big Thompson Canyon where we will sample, identify, and prepare a collection of aquatic insects for you to keep. The best way to learn about these bugs is to be in the river actively collecting and identifying. Participants will receive sample vials with ethanol, forceps, tray, two bug boxes and taxonomic key. So bring your waders and prepare to improve your knowledge of aquatic insects, and your ability to catch more trout!

Want to learn to fly cast, or improve your casting by understanding the essential elements of a good cast? Come join us for this 2-hour session on the basics, with Jim Tilmant, FFF certified flycasting instructor.

THE CLASS HAS FILLED.   STAY ALERT FOR ANOTHER SESSION IN THE NEAR FUTURE!

Elements of instruction will include:

*   Presentation of the fly

Fly casting properly is not difficult but does require learning a few simple skills. Time spent fishing will be much more enjoyable and productive if you understand what to do, have practiced, and can make a basic presentation cast before trying it on the water.

(Note: This class will be on grass and will not involve time on the water)

THE CLASS HAS FILLED.   STAY ALERT FOR ANOTHER SESSION IN THE NEAR FUTURE

DEFINITION:  ATTRACTOR:  An attractor is a set of states (points in the phase space), invariant under the dynamics, towards which neighboring states in a given basin of attraction asymptotically approach in the course of dynamic evolution.

That’s all well and good if you are into chaos theory in applied mathematics, but what I have in mind is flies!

There is not always a hatch to figure out.  Even when there is, it often pays to throw something bizarre that will stand out in the crowd.  This Saturday the theme is Attractor Flies.  These patterns don’t try to imitate a specific bug, but instead incorporate a number of “trigger” features that get reckless fish interested, or are ambiguous enough that a motivated fish is inclined to believe resembles something on the menu.

I will be tying a few well known attractors such as the Prince, some dries like the Royal PMX, and, and a few of the more recent designs such as the Rainbow Prince, Rainbow Warrior, and Chili Pepper streamer.

If you have any doubts about the effectiveness of attractor flies, just look at the past winners of the Jackson Hole “One Fly” contest winners! 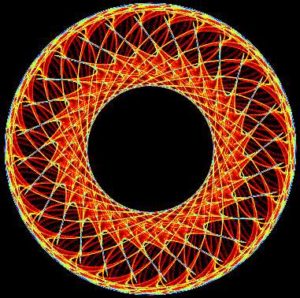 An unusual complex attractor with a high degree of rotational symmetry

Open a copy of the recipe list for Saturday’s patterns