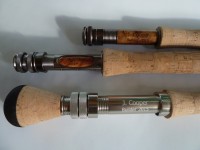 We hope you enjoyed Jim Cooper’s presentation last Saturday, along with Brian Chavet, describing the process of rod building and introducing our opportunities this Winter.

To recap, at Elkhorn we are committed to small class sizes so you receive the full benefit of our knowledgeable instructors.  Classes are scheduled for small groups at times convenient for you. Tools and equipment are available for your use, such as rod wrapping stations and the rod turner for applying the epoxy finish.

The class begins with a session in which you fit a grip and reel seat, and assemble the butt section.  Next, you learn how to align your rod sections with the spine, mark your rod guide spacing, and make thread wraps to secure the guides.  Last, you will mix the epoxy and coat your thread wraps.

The fee for our small-group rod building class is $75, of which $25 can be applied as a credit towards the purchase of any Elkhorn rod blanks or components.  We have blanks available for most of our product line, and can certainly provide a suitable blank for any length and line weight.

If you would like to build a rod, fill out and send the form below with your contact information, and we will answer any questions you have and help schedule you for instruction.

Let’s take a quick look at a problem that arose when I began to assemble the cork and reel seat on the 8 wt rod. The seat is all metal without a visible wood insert. Its inside diameter is five-eights of an inch and the rod diameter is slightly less than three-eights. This is too large of a gap to fill with tape and epoxy. What to do?

My first thought was to cut a piece of wood the length of the seat and drill a 3/8 hole through its length. A piece of 3/8 all-thread through the hole would be chucked in the lathe, and the outside turned down to 5/8 diameter. Glue this into the real seat and the problem is solved. But, this is not a workable solution if you don’t have a lathe. We all have an Ace hardware, so I decided to solve this problem with a trip to the local hardware store.

I found a 5/8 OD, ½ inch ID nylon bushing along with a ½ inch OD, 3/8 ID bushing. Gluing these together produced the needed diameter deduction.

Two half inch surfaces holding the rod in the seat doesn’t present a strength concern with the seat being a solid metal tube. Nor am I concerned about enough glue surface to hold it in place. There isn’t much twisting force against the seat during normal use. 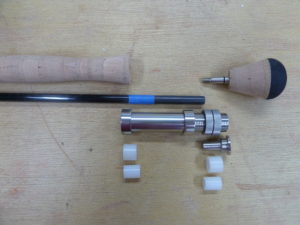 The photo shows how all the parts are aligned when assembled. Note that the rod blank doesn’t extend to the end of the seat. It butts up against the end cap plug. This plug is threaded to accept the screw in cork butt. The alignment pictured isn’t exact, the bushing needs to be forward so that both the blank rear-end and the cap front-end are inside the bushing. This complicates placement of parts during final glued assembly, but all things are possible.

My good friend says, “I do it the way I think I should the first time, and the way I should have the second time.” If there is a second time, I will get three bushings, two for the blank and one for the cap, and the alignment challenge goes away. This unplanned post arises from having to overcome an unplanned problem – always the source of anxiety your “first time”.

When I picked up the rod blanks at Elkhorn, Brian provided a guide spacing chart, which listed the distance from the rod tip to each guide. This makes the job easy, but take care that you measure from the tip top guide. That moves the guides ½ inch forward from where they would be if measuring from the end of the blank. This is significant because it allows more space to wrap the ferrule separate from the guide closest to it. See the blue tape in the photo. It locates the center of the guide 1 and 1/8 inches from the ferrule. The green tape shows the location from the blank tip. 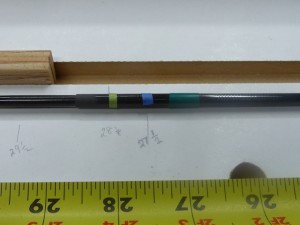 It is personal preference of mine to not combine the ferrule and guide foot wrap. This allows me to do an under layer wrap of Kevlar thread over the female ferrule, dramatically increasing its strength. I once split a female ferrule when it loosened during a double haul cast with a nine weight rod. I will explain this under wrap in more detail in the next post.

The green tape on the rod blank is for identification. Remember, I working on three different rods, and mixing the blank section would be a big inconvenience.

Rod blank suppliers like Elkhorn typically supply guide spacing data, but if not I can help.

The spreadsheet pictured below was developed when I had no spacing guidelines for a three piece fiberglass rod. The example would be for a nine foot four piece rod. All dimensions are from the tip except the first stripping guide to the butt end. You enter the information in yellow and the results are calculated. The location of the first guide and the stripping guide can varied until guides don’t fall on a ferrule. 32 inches to the strip guide and 3.5 inches the the first guide are good starting points. I varied these until until the 5th and 8th guide fell equal distance from a ferrule. If you would like a copy of this spreadsheet for your own use, email me at jimc@AirstreamFlyFish.com, and I will send it.

In the next post guide wrapping will be the hot topic.

Previous:  What About Spline?