I fished the Cameron Pass area intending to catch a Grand Slam (four trout) and maybe a grayling. Instead I caught a six fish sla 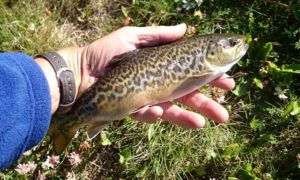 m including a tiger trout, pictured here. It was the first I had seen. I understand they are a non-reproducing cross between a brook trout and a brown trout. They must be a accomplished predator with that ancestry. If you would like to see images of all six fish, read the whole story, and learn where most were caught, click Slam Article