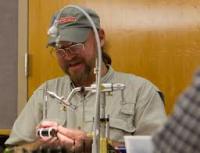 There won’t be a recipe sheet for Mark’s tying demo.  He never knows what he’s going to tie until the director yells “Action!”

Instead, we are going to play Mark McMillan Bingo.  Download a playing card here.

Elkhorn hosts a guest tyer each Saturday at 10AM all winter, starting in September, running through April.  Drop by for a coffee and  tying and fishing talk!

The term “innovative” is insufficient to describe Mark’s tying.  He’s talented and accomplished with modern patterns, but just can’t limit himself to coloring between the lines.  He finds materials anywhere – JoAnne’s, WalMart, roadsides, and probably even an auto parts store.

Join us on Saturday for the William Wallace of fly tying! 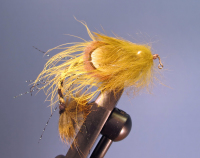